On board SOFIA - an airplane with the telescope 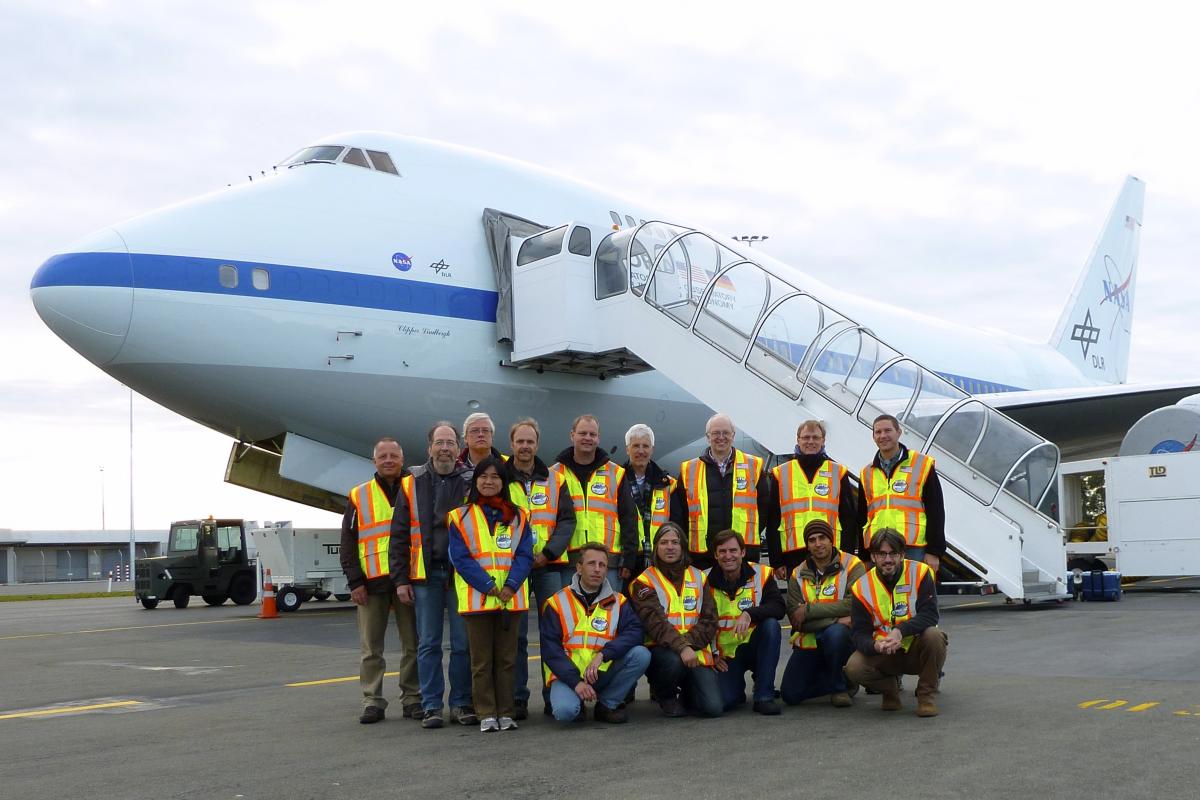 Where are most of the science telescopes you know located? On high mountains in Hawaii or Chile? Onboard satellites? Each type of observatory has its own advantages, and what I am currently working on is the observations with the telescope on board the airplane - SOFIA (Stratospheric Observatory For Infrared Astronomy). It is a joint project of the U.S.A and Germany. A telescope with a diameter of 2.7m is integrated in a Boeing 747 SP airplane, and we fly at an altitude between 12km and 14km; somewhat higher than commercial airplanes. This altitude enables us to observe much wider wavelength ranges compared to observations from a ground-based telescopes (~5000m altitude), because we can reduce the effect from the atmosphere significantly. Now do you think, that telescopes onboard satellites are the best? Well, the airplane observatory has an advantage also compared to the satellite: we can operate it on a long term basis (for example 20 years), while continuously upgrading instruments based on the latest technology.

My name is Yoko Okada. I am working as a postdoc at I. Physikalisches Institut at Universitaet zu Koeln, Germany. I am Japanese and received my PhD from the University of Tokyo. After 3 years of being a postdoc in Japan, I joined my current group, which researches the interstellar matter in our Galaxy and nearby galaxies. Our usual research life runs like this - we think about which kind of observations are useful to understand one or a few unsolved questions, write proposals to the observatory to get time for observations, plan and carry out observations, analyze data, reach conclusions and write research papers.

What am I doing with SOFIA/GREAT?

In I. Physikalisches Institute at Universitaet zu Koeln, we work together with instrument building groups. GREAT (German REceiver for Astronomy at Terahertz frequencies) is one of instruments they are working on, which is a heterodyne spectrometer for SOFIA. It is capable of taking spectra at the Terahertz frequency range with a very high spectral resolution. As a member of the GREAT consortium, I maintain the observing software and support the GREAT observations that were proposed from astronomers all over the world. I have also my own scientific projects, which span several flight series of GREAT. One observing flight is typically an entire night. Since pointing of the telescope is limited by the heading of the airplane, and since we have to come back to the same place after one night, a precise flight plan together with the observing targets is built beforehand. Usually we are based on Palmdale, CA in the U.S.A., but we had a first southern deployment in New Zealand in July 2013, to observe many interesting astronomical targets that cannot be seen from the northern hemisphere.

Around 30 people are onboard, with individual roles - telescope operators, mission directors, pilots, astronomers who execute observations or look at the data quickly to make on-the-spot decisions about the observing strategy, people who operate the instrument, etc. When the observing goes smoothly, we are relaxed and enjoying ourselves, but once we have a problem with the observing, we immediately begin serious work to solve it. After the flight, we are exhausted, but on the other hand, I feel that it is very good to join the real observation efforts and obtain scientifically important data including those for my own research.

About GREAT (under 'Heterodyne Receivers')
http://www3.mpifr-bonn.mpg.de/div/submmtech/