My name is Ronan Higgins. I work as a PostDoc at the I. Physikalisches Institut at the Universität zu Köln, Germany. I am originally from Ireland and received my PhD from the National University of Ireland, Maynooth. Since I came to Cologne, I have had the opportunity to work on numerous projects varying from satellites (Herschel space telescope) to aircraft (SOFIA) and ground-based telescopes, such as NANTEN2. 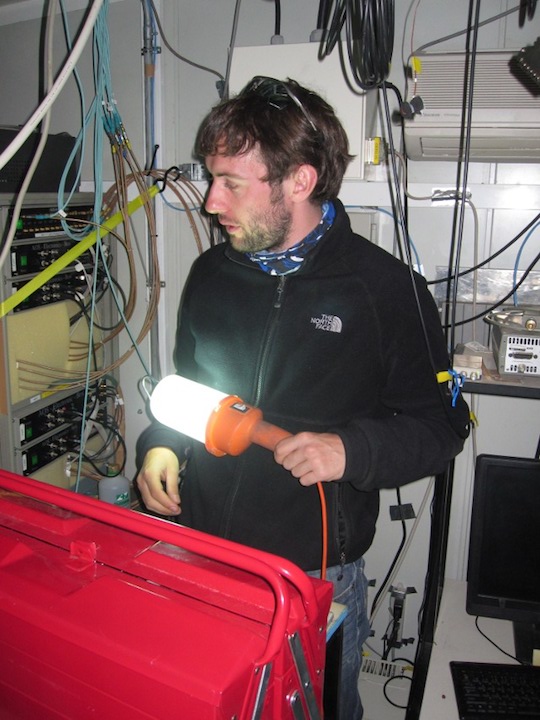 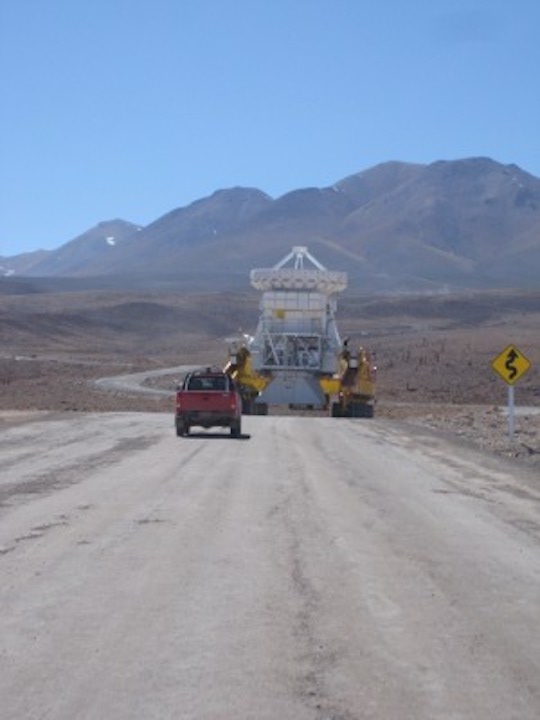 Getting to the observatory

The trip from Cologne, Germany to Chile is an arduous one, depending on train/flight/bus connections can take up 36 hours from door to door. A direct flight exists from Frankfurt to Chile however the best option sometimes can be to fly through Madrid and from there to Santiago de Chile. The flight is on average 12 hours and is normally through the night. One leaves Madrid around midnight and arrives in Santiago at 7 in the morning. Once you clear customs it is on to Calama. Calama is the nearest airport to the telescope site and base camp at San Pedro de Atacama. Flights to Calama are every 4 hours approximately and normally one must wait a while in Santiago airport before catching the next flight. Once you reach Calama there is a bus that takes you the 100km to San Pedro de Atacama.

On first impression San Pedro appears like something from a western movie with dusty unpaved streets and adobe housing, however on closer inspection one realizes that it has a number of good restaurants which make the 3 weeks stay in the desert a little more comfortable. In San Pedro, the telescope consortium rents accommodation at the Astronorte complex. At Astronorte an office and small lab is present for running observations and making small instrument repairs. Also based at Astronorte is the group Jeep, a green Nissan Terrano. It is necessary to have a four wheel jeep to access the telescope site and climb the steep hills on the way.

When you have arrived in San Pedro it takes a couple of days to completely acclimatize to the local climate. San Pedro is located at an altitude of 2,407m. Which is already approaching the highest mountain in Germany (Zugspitze 2,962m). The effects of high altitude can vary but you notice a distinct lethargy and sometimes headaches. Normally these effects subside after a day. It should be noted that before going to San Pedro each astronomer undergoes a rigorous medical exam and can only go to the high site when no medical issues are present.


After a day you are normally ready to go to the telescope site at 4,800m. It is not necessary to go every day and sometimes the telescope is operating normally and requires no maintenance. Going to the site requires a good deal of preparation and one must be sure that there is enough water and food in the Jeep. In addition it is necessary to have 2 radios in the jeep. One radio is used to communicate with our Japanese colleagues. Normally we drive to the site in a 2 jeep group in case one gets stuck or has some problems. It is also necessary to have a oxygen meter and oxygen bottle in the car. It is necessary to monitor ones oxygen level regularly. The oxygen bottle is necessary in case of an emergency and some times it is needed when you are doing physical work at the site such as lifting.

The telescope is situated about 70km from San Pedro de Atacama. The trip to the site is an adventure in itself. The NANTEN telescope site is situated within the area of the ALMA observatory. ALMA staff controls access to the site and one must show your passport at the security checkpoint, this is then checked against a list of permitted NANTEN staff. From there one drives to ALMA OSF (Operations Support Facility), this is the area where the ALMA dishes are assembled. Occasionally the ALMA antenna supporter is on the road to the telescope. This a spectacular piece of machinery and is used to transport the ALMA antenna to the high site.

The OSF is at an altitude of 2,900m. At the OSF there is another checkpoint which permits access to the ALMA high site. Once passed this checkpoint the slow journey up the mountain begins, some30km from the OSF to the ALMA plateau. Every 10km each Jeep must call ALMA security and stating our project and which direction we are going (ascending or descending). Once we reach the ALMA plateau we continue on another 10km to the NANTEN telescope. This can be a bumpy trip!

Once we reach the NANTEN site, we normally take a 15 minute break to acclimatize. While the effects of the high altitude aren't apparent immediately, it is noticeable when you climb stairs or stand up quickly. The telescope is covered by a metal dome, the doors are controllable and can be closed during extreme weather. The SMART array receiver is housed in the receiver cabin which is inside the dome. The SMART receiver was designed and built by the I. Physikalisches Institut in Cologne. Sometimes the receiver requires a retuning to improve the instrument performance. Since the instrument is an array receiver this can be quite a complicated procedure and requires an experienced operator. 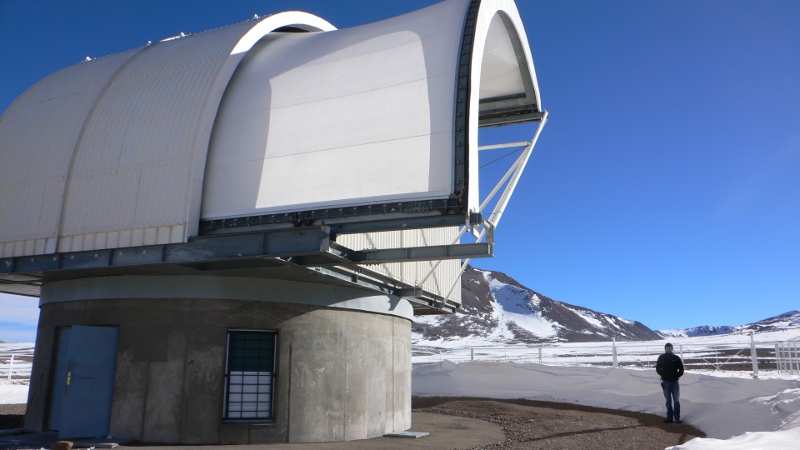 The NANTEN2 Observatory (NANTEN is Japanese for southern sky, 南天 nan = south, ten = heaven, sky) is a collaboration between research institutes in Japan (Nagoya and Osaka University), South Korea (Seoul National University), Germany (Universität zu Köln, Argelander-Institut Universität Bonn), Switzerland (ETH Zürich), University of New South Wales (UNSW), and Chile (Universidad de Chile). The telescope is located in northern Chile in the Atacama desert. For submm observations, telescopes should be placed as high as possible to get above water vapor which absorbs much of the interesting signal. Hence NANTEN2 is located at a height of 4,865 m altitude on Pampa la Bola plateau.

The NANTEN2 consortium maintains a constant presence at the site when the telescope is operational. The telescope is normally closed for the months of December through April, as the weather conditions are normally too variable to observe and of course nights the shorter. While observing is normally conducted remotely, telescope and instrument maintenance require a constant presence in Chile. The telescope is normally staffed by a pool of astronomers who spend 3-6 weeks a year in Chile. In this article I will talk about a typical observing run and some of the interesting things one sees at this extreme part of planet Earth.

The telescope is covered by a metal dome, the doors are controllable and can be closed during extreme weather. The SMART array receiver is housed in the receiver cabin which is inside the dome. The SMART receiver was designed and built by the I. Physikalisches Institut in Cologne. Sometimes the receiver requires a retuning to improve the instrument performance. Since the instrument is an array receiver this can be quite a complicated procedure and requires an experienced operator.

Once the instrument performance is optimized and any maintenance is completed we return to the San Pedro de Atacama. Observations are usually undertaken late at night night after 3am. The water vapor level can be high after sunset and you must wait until well after before starting an observation. If the weather conditions aren't good enough no observations are undertaken. The state of the weather is normally determined by looking at the APEX telescope weather conditions website.

Before starting an observation the pointing offset must be established. The pointing describes how accurate the telescope can determine a position. This is normally established through observing strong sources such as planets (Jupiter, the Moon and Saturn). Once the pointing accuracy is established astronomical observation of interesting sources can begin. As the data is taken it is inspected by the observer for quality. If the data quality is poor, further investigation may be necessary and a possible return to the telescope to fix any detected problem. If the data quality is sufficient the data is stored for more detailed analysis later.

For more information on the SMART receiver and the science undertaken with NANTEN2 see the following webpages: