Chirped Pulse Fourier Transform Spectroscopy (CP-FTS) is a rather new technique of molecular spectroscopy which enables i) recording of broad band spectra in the centimeter and millimeter wavelength ranges and ii) fast excitation and data acquisition which allows to record time dependent signals. The latter opens new experimental studies such as collision kinetics of spectrally identified molecules or 2D pump-probe spectroscopy which helps assigning complex spectra. Both aspects are addressed in this project as outlined below. This project has been started in the second funding period with building various instruments. The main results are CP-FT spectra of jet-cooled molecules in the range 12-26 GHz and first spectra also obtained in the 100 GHz range. The sensitive laboratory emission spectrometers built in collaboration between B3, B4, D3 and project S shall serve as advanced receivers for future CP-FTS experiments. State-to-state rate coefficients for NH3 self collisions have been determined using the CP-FTS instruments. In the initial funding period the spectroscopy of several binary complexes such as NH3 - HD have been investigated in detail in order to determine the potential energy surface (PES). More broad band spectra of complex molecules shall be recorded and analysed in the future on a routine basis using a cold collision gas cell permitting studies at temperatures as low as 4 K. Also more collision experiments of the system NH3 + H2 and He shall be conducted to help interpreting astrophysical observations within CRC956.

A chirped-pulse broadband spectrum of 2-cyanobutane is shown in the Figure below. The spectrum is composed of three measured spectra with local oscillator (LO) frequencies of 12.2 GHz, 14.5 GHZ and 15.7 GHz. The LO signal, marked with ”LO” (purple), is suppressed by two diplexers after the IQ mixer, as visible in the noise level dip at 30 MHz left and right of the LO frequency. The receiver sensitivity is somewhat reduced more than 500 MHz apart from the LO, visible in the reduced and sloped noise level at around 13.3 GHz and above 16.2 GHz. The top spectrum shows the full dynamic range, while the bottom spectrum is ten times zoomed-in vertically to show the details of noise and lines.

Lines marked with a plus (+, blue) are identified as belonging to 2-cyano-anti-butane. Lines marked with an asterisk (*, red) identify 2-cyano-gauche(-)-butane lines and lines marked with a circle (o, green) refer to 2-cyano-gauche(+)-butane respectively. Assigned lines which have been used in fitting molecular constants are labelled with their J; Ka; Kc values as well as their respective color. Lines and features in the spectrum, that are unidentified or known electronic interferences, are noted with an exclamation mark. This work has been used for a first fit of vibrationally excited conformers of 2-cyanobutane. This work helps a lot in finding butyl-cyanide in space. 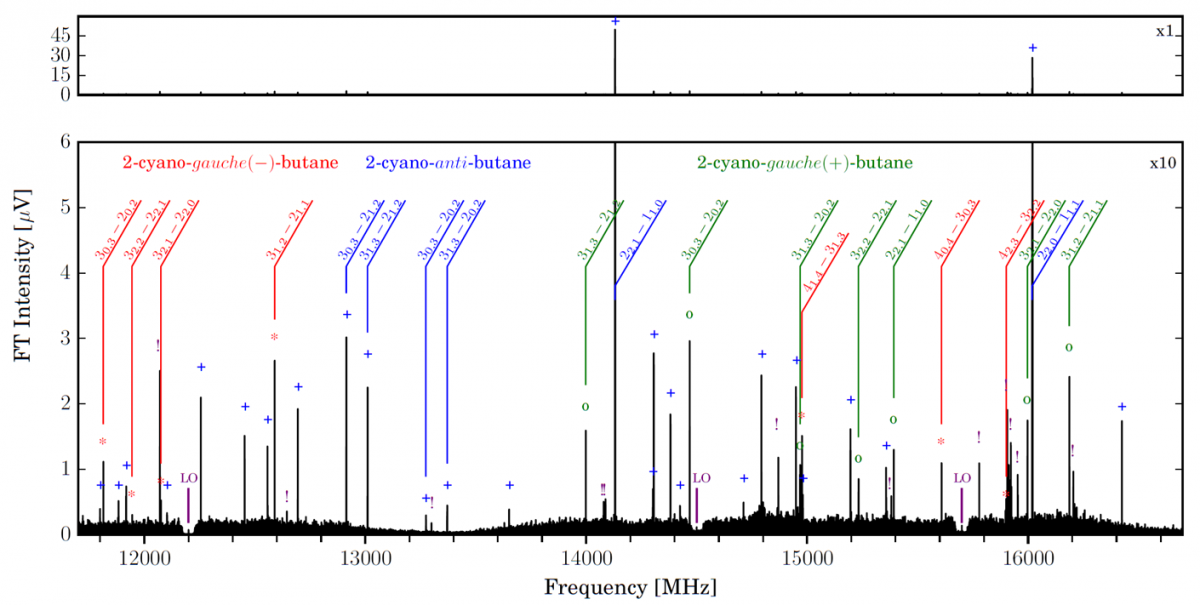 The transition J;Ka;Kc = 2;2;1–1;1;0 of 2-cyano-anti-butane, is shown in the  spectrum below. As expected the intensity of this low J-value transition in the cooled molecular beam reslts in a reasonably high signal-to-noise ratio. For the FT a 25.6 s (or 80000 points) long section of the FID signal was taken. Here the hyperfine splitting due to the 14N nucleus is obvious. Consequently, the transition is splitted into five components; the theoretical intensities are depicted by the blue lines. The F-quantum numbers are assigned as shown.