Chirped Pulse Fourier Transform Spectroscopy (CP-FTS) is carried out in a newly built Chirped-Pulse Supersonic Jet experiment. The spectrometer is based in parts on the design of the Impact Chirped-Pulse spectrometer at the University of Hannover.  The Figure below hows a schematic diagram of the experimental setup. Central part of the instrument is a free molecular jet setup which has been used previously in the OROTRON spectrometer. The jet expansion is probed perpendicularly by the chirped pulse microwave configuration.

Schematic of the CP-FTS jet spectrometer

The Figure displays primarily its design and individual electronic parts. Elements for the molecular excitation process are shown on the left side of the Figure while those used for recording the molecular signal are displayed on the right. A 500 ns long chirped-pulse in the range of 0-500 MHz is created by a Keysight M8190a 12 GS/s arbitrary waveform generator (AWG). The two channels of the AWG are used to drive an IQ-Modulator in order to run a 0 - 1 GHz chirp. When mixed with the local oscillator (LO) frequency in the range 12-26.5 GHz a respective LO+/-500 MHz excitation sweep is generated. This up-converted signal is amplified either by a 20 W (12-18 GHz) or a 4W (18-26.5 GHz) solid state power amplifier and coupled via a directional high-gain horn antenna (25 dBI) into the vacuum chamber where it interacts with the pulsed free jet. Since the antennae are comparable in size with the dimensions of the vacuum chamber (360x360x200 mm), they are located outside the vacuum and the microwave excitation pulses as well as the free induction decay (FID) signals are transmitted via Teflon windows.

The molecular FID is then collected by a second, equally sized horn antenna (right part of the Figure). The received signal is passed through a limiter, a protection pin-diode switch and a bandpass filter. Following the low noise amplifier (LNA) the FID signal is further amplified to set the dynamic range of the FID to the maximum vertical resolution of a 25 GHz analog bandwidth oscilloscope (Tektronix DPO72504D). Employing the same LO used for upconverting the chirp excitation pulse the FID signal is downconverted using an IQ demodulator to generate the in-phase and quadrature FID signal. Recording both channels of this FID signal the upper and lower side band emission spectrum is determined by a complex fast Fourier transformation. The result of such a broad band excitation and FID emission signal will be shown in the result section for selected examples.

One major advantage of CP-FTS lies in the time information of the free induction decay (FID) signal which also carries the spectrum. We used these capabilities for sophisticated pump-probe experiments. Since the invention of CP-FTS pioneered by the Pate group, pump-probe experiments were used for two dimensional (2D) spectroscopy, where specific states of a molecule are addressed by the pump and the probe pulse. As a result, changes in the probe pulse signal indicate shared states and therefore help in the assignment of complex spectra.

In the experiments of this project the rotational state populations of ammonia are inferred from chirped pulse spectra of its tunneling doublets in a room temperature K-band (20 GHz) waveguide experiment where almost all tunneling doublets can be addressed by a single chirped pulse excitation. Based on the developments in this project a similar instrument has been built in collaboration with Christian Endres, the former post doctoral fellow in this project, now at the Max-Planck-Institute for Extra Terrestrial Physics (MPE). In both our experiments the thermal distribution of states is altered by a pump pulse where the population of the tunneling doublet of a single rotational state is inverted by a Pi-pulse in about 100 ns as shown in Figure below.

The resulting deviation from thermal equilibrium is then propagating to other states due to collisions and interrogated by a probe pulse from which the state populations of many rotational states are inferred at once. Such ideas were already tested since the development of Fourier-transform microwave spectroscopy in the 1970s. 2D spectroscopy was recorded for example for lambda-doublet states of HC15N by B. Vogelsanger et al. (J. Chem. Phys. 91, 2059, 1989) and also the kinetics of rotational energy transfer was investigated for selected examples. However, due to the advent of broadband chirp experiments as developed in this project, many states can be interrogated at once and thus state-to-state rate coefficients be determined. The right part of the Figure above sows the level populations on a linear scale. Note, that the (2,2) doublet states are unaffected by the excitation of the (2,1) doublet. From a series of such measurements as function of pressure individual state-to-state rate coefficients are determined for NH3 self collisions. This fact is illustrated in the Figure above. It clearly shows the relative change of signal of a number of inversion transitions (probe) as a result of the initial pump pulse. Optical pumping is stopped at t=0 and it is nicely seen that the population inversion of the pumped (J,K)=(2,1) state relaxes back on a relatively fast time scale.

Despite stopping pumping the (J,K)=(2,1) state, the neighboring states (3,1) and (1,1) continue to be populated as a result of the large population inversion of the (2,1) state. This is nicely seen in  in the Figure above. In the linear plot it is also apparent that the (2,2) state remains unaffected. This is because K changing transitions are extremely slow. Therefore, the rise seen in (3,1) and (1,1) is determined by just one respective state-to-state rate. From the pressure dependence of these rates state-to-state rate coefficients are determined for the first time. Those rate coefficients are on the order of 10−10 cm3/s, which is about a tenth of the (maximum) collision rate coefficient.

CP-FTS of OCS. Jet cooled spectrum of the J=1-0 transition of many different isotopologues of OCS around 12 GHz taken in natural abundance. Chirp excitation: duration 500 ns, bandwidth 1 GHz, power 20 W. Free induction decay (FID): Instantaneous bandwidth of 1 GHz taken in 107900 acquisitions of 100 μs each. Note the large dynamic range of intensities which demonstrates the high sensitivity of the method. 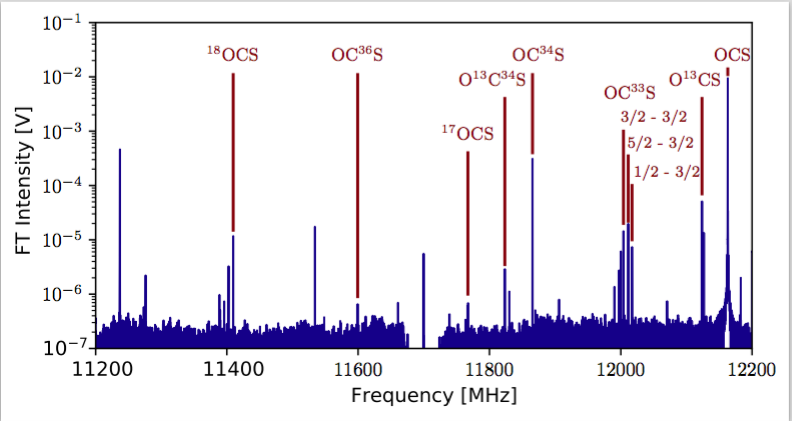