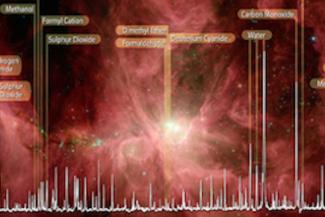 Project C3 provides the chemical framework in which many of the observations, particularly the ones in A6, can be interpreted.  The project has concentrated on the chemistry of hot cores, incorporating and extending grain chemistry to understand how complex molecules, such as the ones studied in B3, form in the best sources to study the extent of chemistry in interstellar space.

The project aims at providing a direct linkage between the chemical models and observations, aided by the laboratory efforts. It develops state of the art models that explore the formation of simple and complex molecules geared towards particular sources observed. These models were developed in collaboration with Edwin Bergin from the University of Michigan, who has a long standing history in innovative chemical models. The concrete long-term goals are to follow the astrochemistry in the framework of the dynamical evolution of star formation, and the feedback processes in hot cores all the way through eventual cloud dispersion. In doing so the variable source structure and chemistry is modeled in conjunction with source emission. So far the chemical network of the model has been expanded to include a complete dust surface chemistry and, more recently, the grain-mantle.  We have also investigated the effect of internal PDRs, which posed special challenges because it contained very high UV fields in very high density.  This formed the PhD thesis of Gwendoline Stéphan.

The distinguishing  feature of the model developed in the project, Saptarsy, is that it can calculate the chemcial and thermal structure of a (at present spherical) structure self-consistently, given the luminosity evolution of the central object, and calculate synthetic data cubes to compare with observations.  In the next funding period (if granted) we plan to speed up the calculation of data cubes and compare the results of chemical observations with actual observations.  We also want to couple the (so far static) structure to results from hydrodynamic modeling, in collaboration with C5, since dynamical timescales are similar to thermal and chemical timescales.  In addition, we would like to improve the grain mantle chemistry by including the effects of radiolysis and bulk diffusion.

Astrochemistry in its general form penetrates both the astrophysical and the laboratory parts of the SFB, and in fact forms a very strong link between the two. Together with C1 this project covers all the relevant processes active in astrochemistry and provides the necessary theoretical background for the interpretation of observations of project area A. C3 is an active customer of the B projects by using the results of laboratory experiments, while being in a constant dialogue about which laboratory experiments are needed to maximize the impact of modeling. With respect to the chemistry in dense star forming regions, the closest links are to the astrophysical A5 and A6 projects and to the laboratory project B3. With the modelling of the dynamic chemical evolution, C3 is also relevant for project areas A1 to A4 and relies on interaction with C5.

The concrete long-term goals are to follow the astrochemistry in the framework of the dynamical evolution of star formation, and the feedback processes in hot cores all the way through eventual cloud dispersion. We will look at the future of molecular observations and harness the new capabilities to more concretely explore the origin of molecules throughout star formation and exploit their ability as physical probes. In particular Herschel, through large wavelength coverage, encompassing high and low energy transitions (tracing hot and cold gas), and ALMA, through superior angular resolution and sensitivity will shed new light on chemical gradients in star forming cores. This is crucial as star forming cores are not homogenous entities and this, along with dynamical evolution, can have a direct impact on the chemical composition. Our aim is to model the variable source structure and chemistry in conjunction to more directly model source emission. In this regard we plan to use the changing conditions to better isolate the key pathways for molecular formation, which depend on the local environment (radiation field, temperature, density). This will then guide our future use of a given molecule as a tracer of particular activity. For instance we now know that N2H+ is an excellent tracer of dense gas prior to star formation, but what are the best tracers of dense gas after the star is born? What molecules are on the grain surfaces and evaporate first (similar to cometary coma as they approach the Sun)? Herschel and ALMA offer new opportunities to explore these issues and our program will be a synergistic effort of observations, theory and laboratory.. Triggered by the availability of HIFI line surveys of hot cores in the Herschel GT KPs HEXOS and CHESS and their follow-up projects, in the first funding period we will focus on the hot core phase and its chemistry. Currently the chemical model contains a full gas-phase chemistry and grain surface freezeout and desorption, but only a limited surface chemistry. The model can explore onedimensional spatial variation in a time-dependent manner, therefore can explore physical gradients and examine kinematical motions of gas (infall for example), but not chemical diffusion/mixing. Our initial efforts will be focused on expanding the network to include a complete surface chemistry, similar to the state-of-the-art models of Herbst and collaborators, but including the moment equations by Lipshtat & Bihan (2004) and Barzel & Bihan (2007), which are more appropriate for grain surface chemistry with a low number of reactants (see also Vasyunin et al. 2009 and Garrod et al. 2009 for a discussion of this). This network will include isotopic species, since studying isotopomers (which are investigated in B3) can give valuable hints to chemical pathways (Charnley et al. 2004, Sakai et al. 2010). Eventually we want to go beyond surface chemistry, by including the 3-dimensional structure of the grain mantle. We want to expand the Collings et al. and Garrod et al. studies by considering the three-dimensional structure of the ice mantle during evaporation, in close collaboration with laboratory studies in B1. It is quite possible that the ice mantle does not evaporate from the outside in, but from the inside out, since water ice is partly transparent to the incoming radiation, which is then absorbed close to the grain core. This could lead to pockets of evaporated or even liquid molecules, trapped by the outer layers. Similarly, the trapping of surface molecules in the porous water ice demonstrated by Collings et al. would create similar structures. Under these conditions (confinement, high densities and pressures, availability of a large surrounding surface area of the cavities), a very complex chemistry could proceed. The only previous work to directly explore structure within the ice mantle is by Caselli, Hasegawa and Herbst (1993). This is despite the fact that the ice observations show clear hints of possible layering in the mantle (e.g. Tielens et al. 1991). Modeling this structure would represent a clear advance as the type of species dominant on the surface influences the reactions that can proceed (e.g. is it H dominated or O dominated) and the binding strength of molecules to the surface. These factors have a strong influence on the resulting chemical composition in the gas and solid phases. If, as is current thinking, the details of the grain mantle evaporation matter, then one should be able to distinguish thermal heating (which would proceed slowly and allow for all these processes to occur) and shock sputtering (which would release the molecules instantaneously without any time for chemical reactions), which in parts of the cores is likely to happen due to outflows. This could account, at least partly, for the rapidly changing chemical composition, and would be a link to C2. Another process to process and release gas mantles are UV or X-ray photons, which are likely to exist around forming high-mass stars, and which would benefit from interactions with C1. However, to become more versatile, on the longer term this model must be linked more directly to dynamics of evolving objects. This is still be very relevant in the context of star formation, during the final collapse phase, but starts at much earlier stages of cloud evolution, starting from the formation of a molecular cloud itself. Many modern theories of cloud and star formation predict a rather rapid dynamical process, so there would be very few, if any, stages where molecular gas is in a quasi-static state for long enough to reach chemical equilibrium. This will necessitate not only following the dynamical state of clouds, but also taking into account turbulent chemistry and turbulent mixing (Godard et al. 2009). In this project, one postdoc position or, if no suitable candidate can be found, a PhD position working on implementing the above program is available, located with Schilke in Cologne. Close interaction with the Bergin group in Michigan, and frequent travels there, are required. 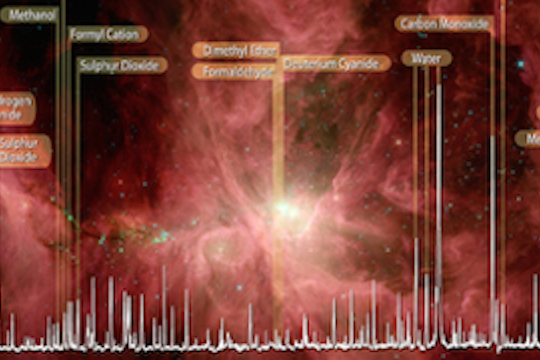