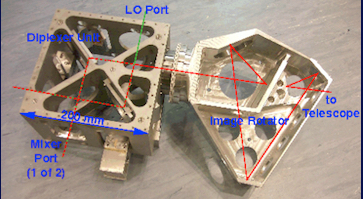 This project, as an engineering service project for the SFB, deals with the design and construction of the astronomical instruments and also supports the laboratory instrumentation. These instruments are based on the scientific and technological developments covered in project group D; they are going to be used in astronomical observations of the SFB and also in the laboratory spectroscopy projects of project group B.

One major goal of project S was to build a heterodyne receiver for laboratory spectroscopy. This receiver is nearing completion and is going through its final phase of cooling tests. Furthermore, the GREAT receiver has been updated. An internal beam scanner is finished and the work on a 4.7 THz local oscillator for GREAT has been advanced by the development of a compact cryostat with a closed cycle refrigerator and active vibration damping. The optics setup for the CHAI receiver and a prototype for its electronics was developed. Project D2 was supported with the manufacturing of THz horn antennas needed in the waveguide embedding of QCLs.

Project S provides the astronomical projects (project group A) and the laboratory spectroscopy group (project group B) with state of the art heterodyne receivers. Project S draws on the latest detector technology provided by project D3 and supports D3 in the production of large quantities of mixers for array receivers. Project S supports project D2 in testing new THz local oscillator developments and, in turn, gets these LOs for implementation in receivers as soon as they become available.