The central research topic of the CRC 956 is to advance our understanding of the complex interplay between star formation and its embedding interstellar medium (ISM). Through numerous dynamical and radiative feedback processes, this interaction drives the “Cosmic Cycle of Star Formation”, which in turn controls the global evolution of galaxies, the physical and chemical processes in the ISM, the distribution and properties of newly formed stars, and the formation of planetary systems, including the origin of life. 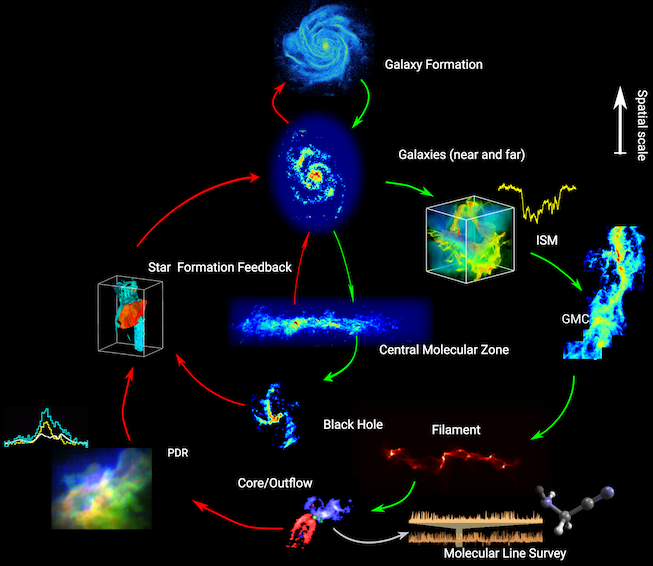 Diagram illustrating the astrophysical research of CRC956: In Galaxies (top, galaxy in the early universe simulated in C4, below: M51 in [CII], SOFIA data from A3) one finds the central region (center 3rd from top; ATLASGAL Central Molecular Zone (CMZ) image; A5) often hosting a black hole (below, mini-spiral adjacent to SgrA*, ALMA data from A2) which, depending on its activity, will give ample feedback to the central zone and the whole Galaxy. The spiral arms host the interstellar medium (ISM, right of the [CII] map of M51; simulation from Seifried (C5, new project C6), ArH+ spectrum from A4) which condenses to Giant Molecular Clouds (GMC; center right, Orion CARMA/NRO 13CO map; A4) which in turn contain filaments (right 2nd from bottom; simulation from C5) feeding high-mass star-forming cores with outflows (G29.96; ALMA data; A6). These objects have complex spectra (bottom right; from Sanchez-Monge; A6), which are interpreted using the results from the B and C areas. The high-mass stars formed in these cores give feedback to the local environment: through outflows (bottom center), and UV radiation forming PDRs (bottom left, Orion red: 13CO, green: 12CO, both from the CARMA/NRO map; blue: [CII] GREAT/SOFIA; A4, C1, spectra M17SW) and, more globally to adjacent molecular clouds or even the whole galaxy, stellar feedback (top left; simulation in C5).
Green arrows descend from large to small structures, the former defining conditions of star formation, which proceeds hierarchically in the different environments of galactic centers and the spiral arms, while red arrows depict the feedback mechanisms going from the small scales of stars back to GMC and even galactic scales. The spatial scales change from a few kpc at the top (galaxy) through 10-100 pc (GMC, CMZ, filament) to less than 0.1 pc at the core level. Note that all images shown in this diagram originate from the research within CRC956 within the last funding period.