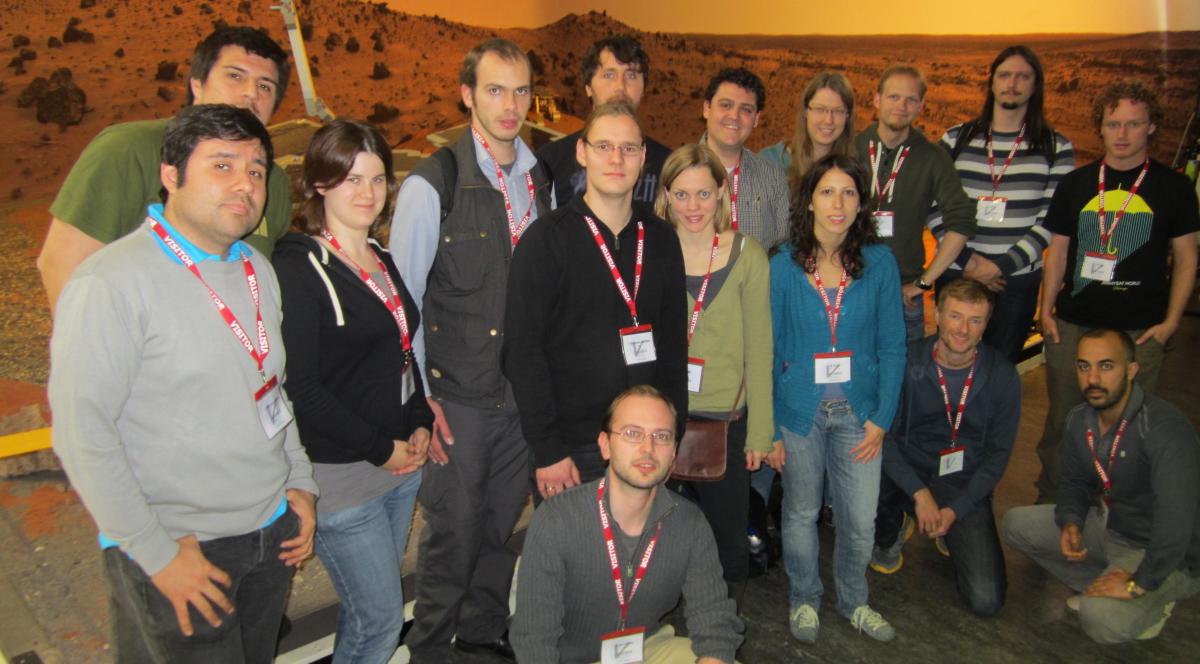 The SFB 956 Students Retreat 2013 took place in the area around Leiden (NL) from October 8th to 11th . Seventeen (mainly PhD) students participated in the retreat. We were accommodated in three self-catering houses in a bungalow park in Noordwijk and visited the Museum Boerhaave, Leiden Observatory and ESA’s ESTEC Test Center. Additionally, there was some spare time for social activities. For travels, three cars were rented. The retreat aimed, on one hand, at broadening the students knowledge on the research that is conducted in other institutes and facilities. In particular, special emphasis was given to research that is related to SFB topics. On the other hand, during the retreat the students had the chance to meet and discuss on their PhD topics, their role as teaching assistants and their future in research. Therefore, the retreat had a special role in allowing students networking, by providing us with time and room to get to know each other.

It is the Dutch National Museum for the History of Science and Medicine. We had a guided tour through the museum and some time to explore it individually afterwards. It was amazing to see the differences on one hand and the similarities on the other between physical experiments now and then. For example, the first demonstrational experiments for physical lectures were impressively simple and close to the modern ones in their operation principles. Contrary to modern experiments, eachexperimental setup - either used for demonstrations or actual research - had plenty of decorative features. While the principles of demonstrations experiments did not change much over the centuries, the setups for actual research and everyday tasks did so very much. We saw early versions of quadrants, sextants and pendulum clocks for navigation. Furthermore, very small microscopes with homebuilt lenses for the investigation of any kind of biological samples and processes were displayed. The comparison with the tools we have at hand nowadays (GPS, electronic microscopes) reminded everybody of the difficulties involved in the performance of fundamental scientific works. Also the change from decorative to pure functionality over time was observable on the tour through the different periods of scientific history. For example, the first liquefaction of helium by Kamerlingh Onnes was performed in 1908 in a setup, that looked very much like modern laboratory setups, based on the idea that you take what you get and make it work somehow, completely uncaring about the appearance of the result. 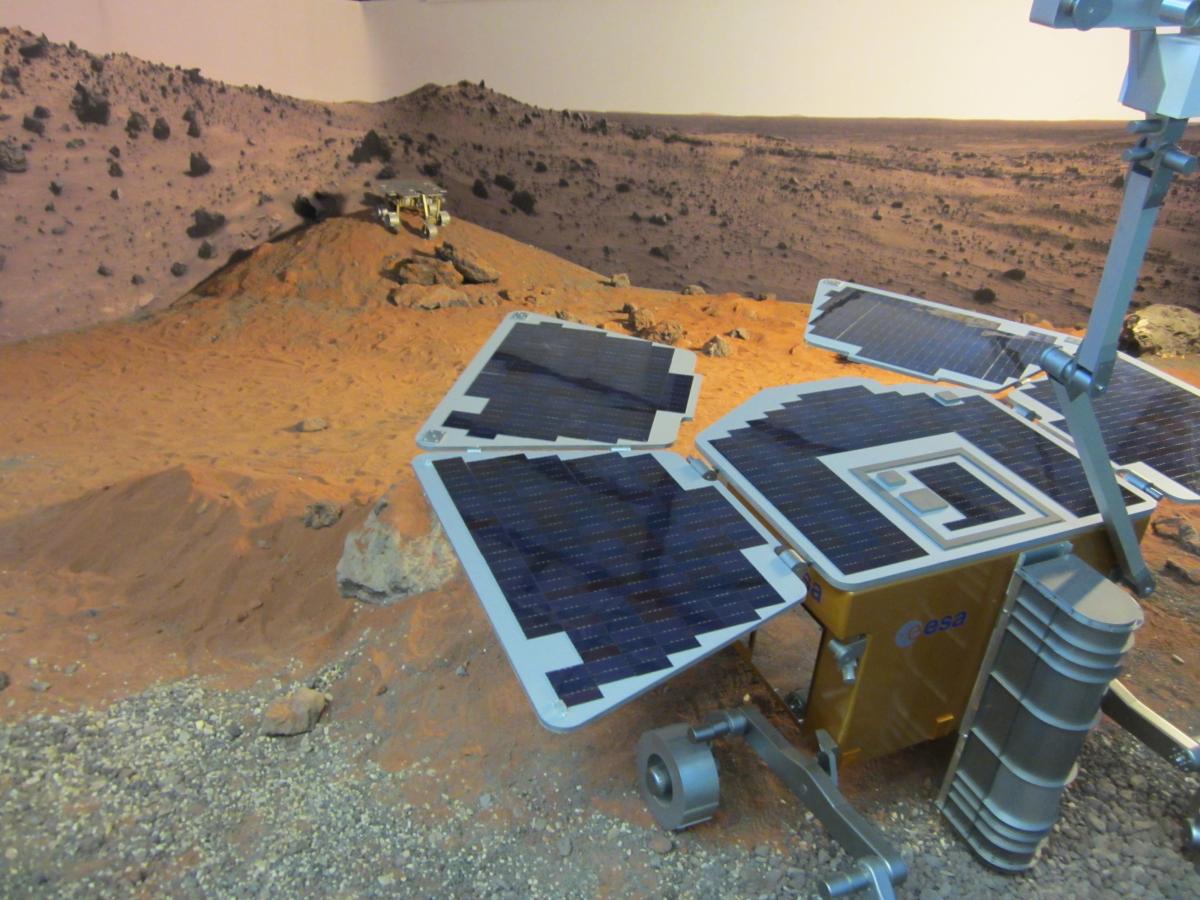 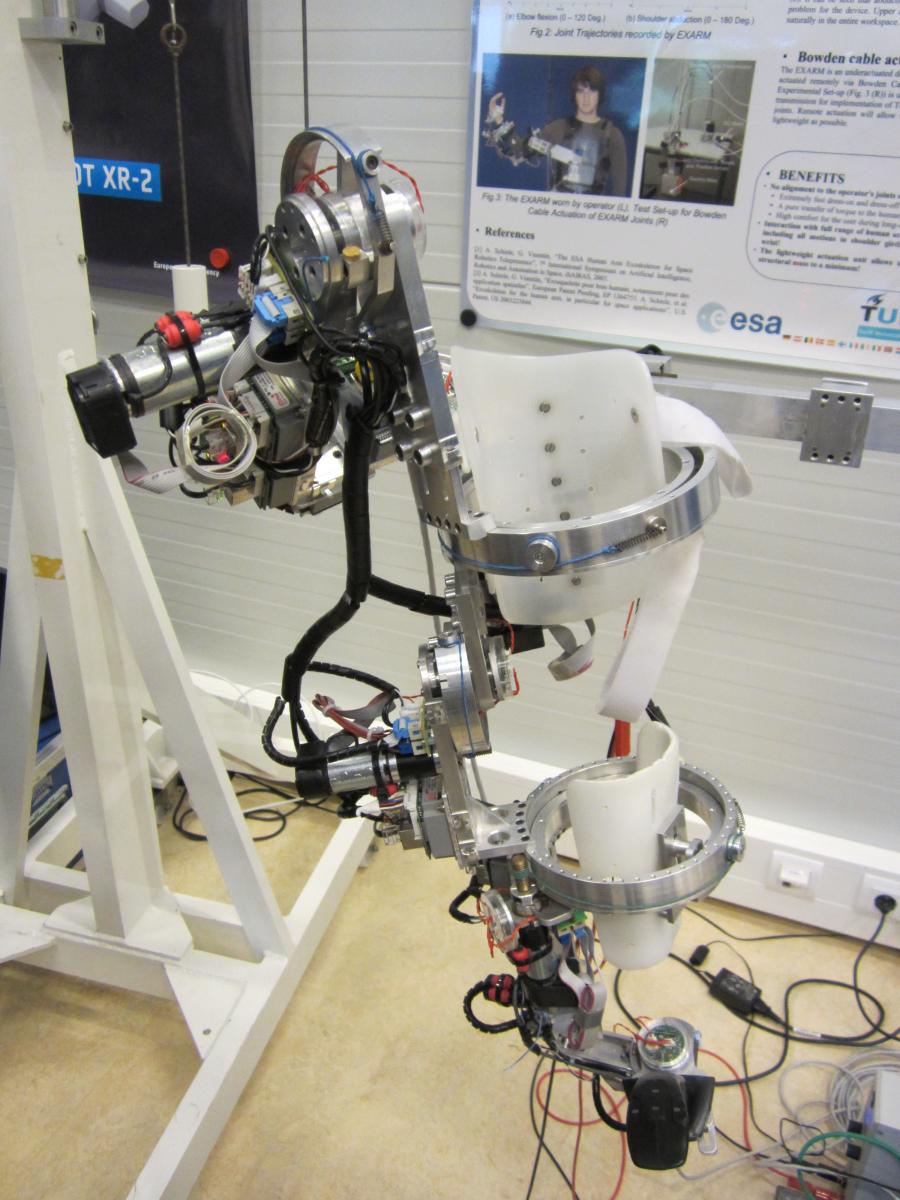 The mixture of different astrophysical divisions in the Leiden Observatory is quite similar to the mixture in the Ph1 in Cologne, i.e. instrumentation, laboratory, modeling and observations. The different research fields in Leiden complement very well with the interests of the SFB. For example, they are exploring the ways to planet formation, and we learned about the obstacles on the way from dust to planets. Additionally, they perform observational and laboratory astrochemistry, with the focus on grain chemistry. The key aspect of the instrumentation is adaptive optics, which can not only be applied on telescopes, but also on microscopes. Our visit to Leiden Observatory started with three excellent introductory talks by PhD students about some of the Leiden research interests and current results. Afterwards we were guided in small groups through the laboratories of the group of Prof. Linnartz. Every experimental setup was presented by the student working on it and we had very lively discussions with them. 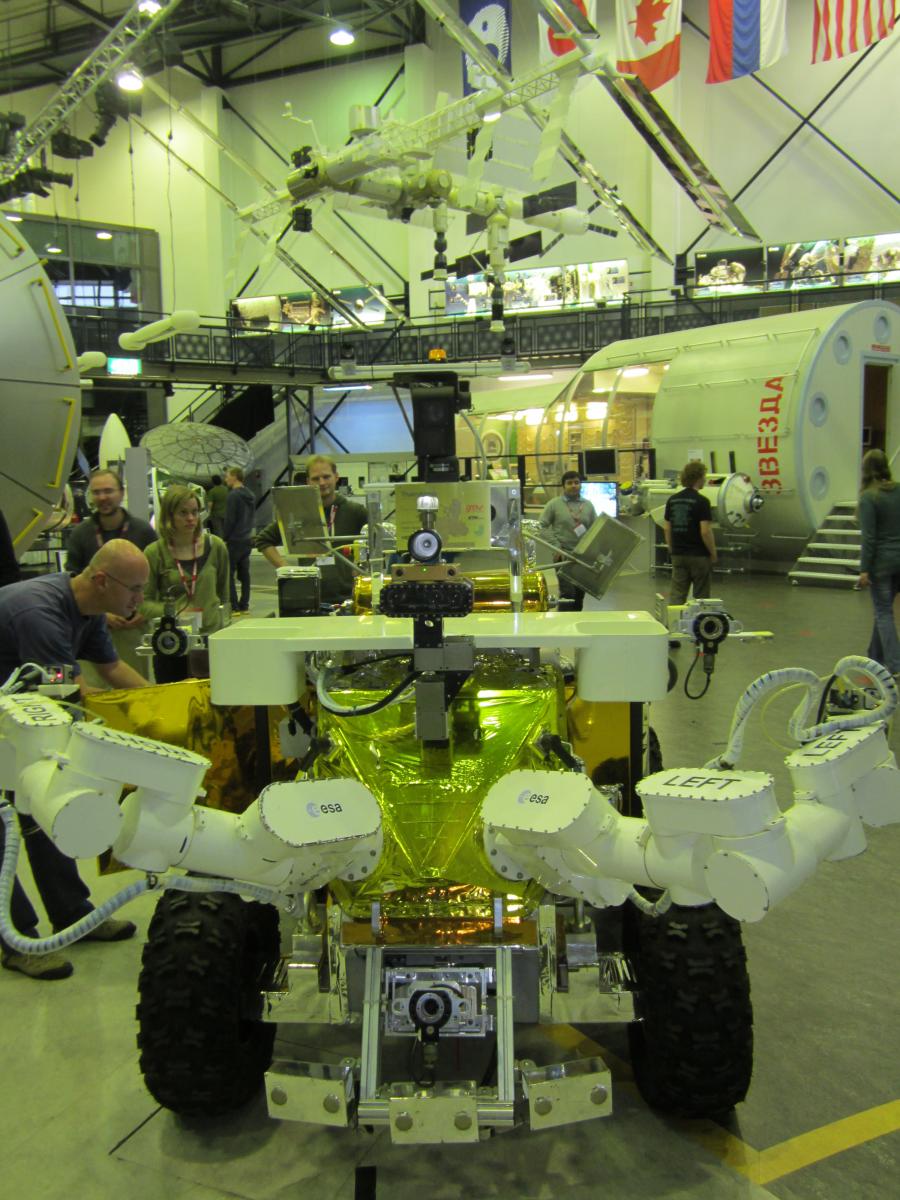 The European Space Research and Technology Centre of the European Space Agency in Noordwijk includes test facilities and development laboratories for different aspects of space flight. After an introduction into the organisational principles of ESA, we were allowed to visit the tele-robotics laboratory and the mars-rover laboratory. In both laboratories, we could talk to the PhD students working there. While the tour through the ESTEC center and the introductory presentation were clearly the usual advertisements, though very interesting, the lab-tour was definitively something special. It was amazing to see the results of close collaborations between engineers and natural scientists and to learn about the challenges devices must overcome when leaving the earth. The dinners on the retreat were always taken together with the whole group, providing a nice atmosphere for exchange between the students, especially those from different work groups. The feedback from the students was very positive. We welcomed this opportunity because it granted us more time than the working environment usually permits to deepen the bonds amongst each other.
Lively discussions made us aware of new approaches to scientific challenges that were already experienced by other members of this group. It was also perceived as very positive to see how enthusiastic colleagues are about their research and their teaching duties. 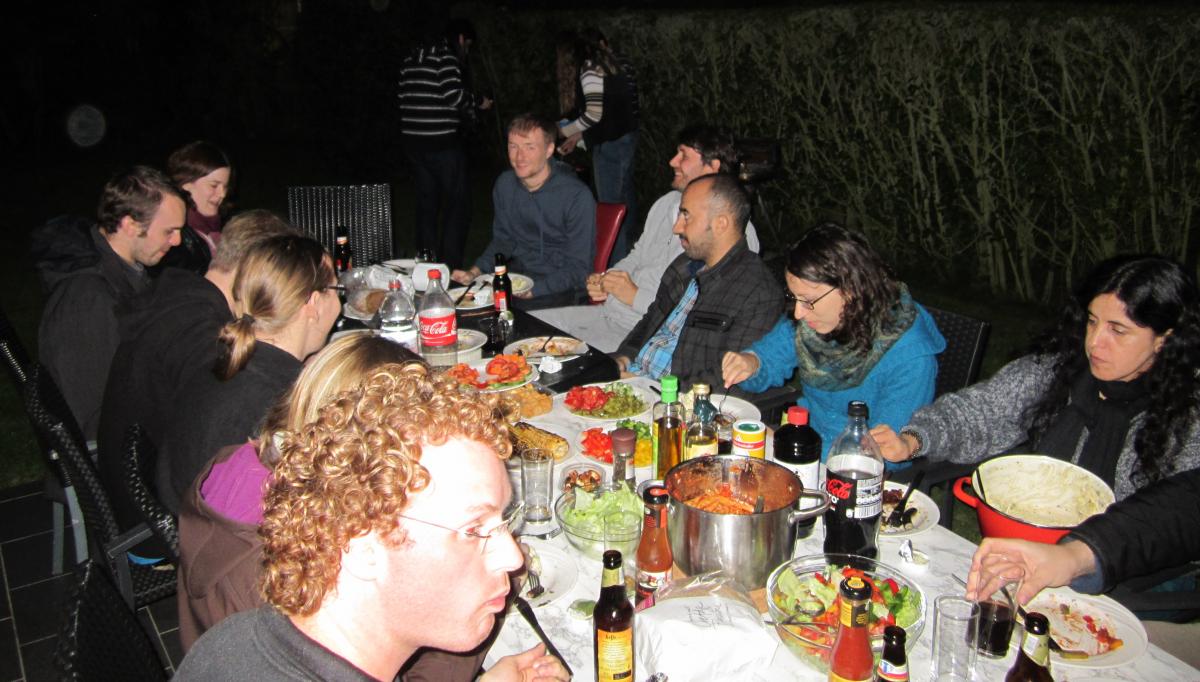 Beside the common meals, we also had some hours of spare time on Tuesday afternoon and Thursday morning. On this occasions we split up in smaller groups, going for different activities such as beach hikes and parlour games. These times were also widely used to deepen the contacts made during the dinners or the travel times and to discuss issues in smaller groups. 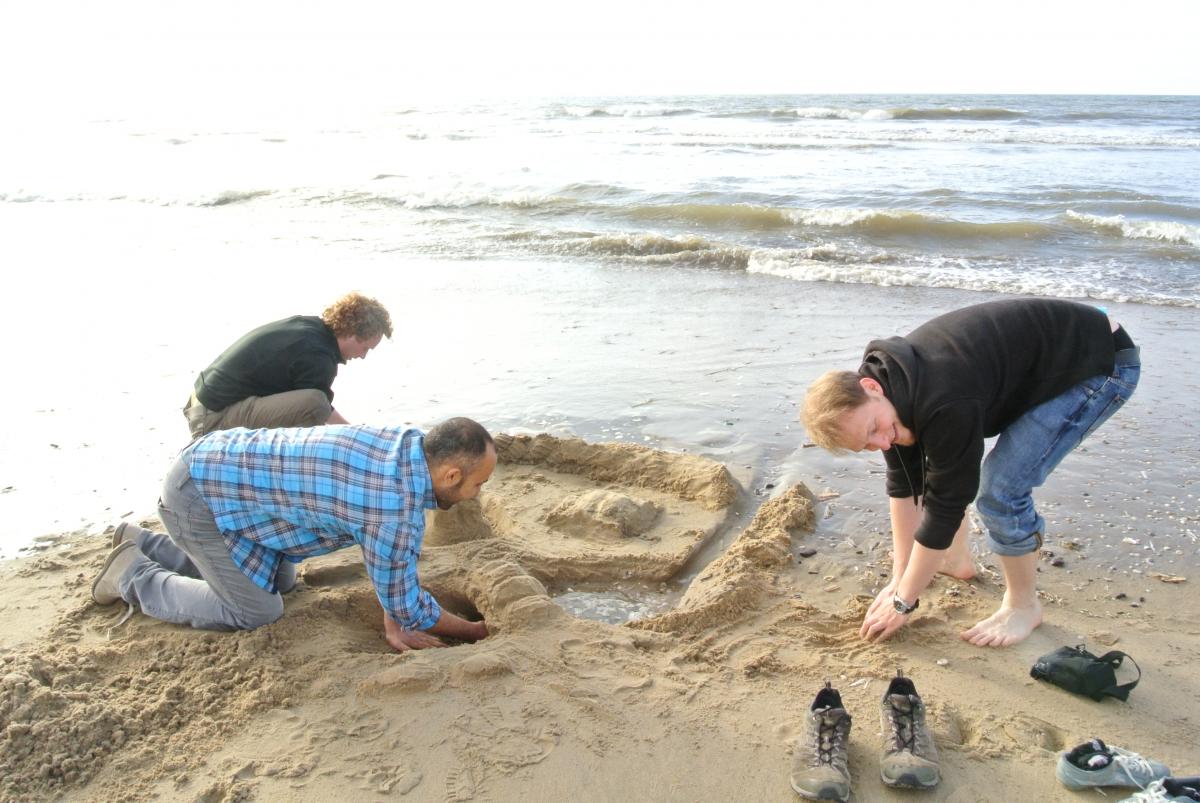 All of us consider the retreat a valuable experience. Besides the tough scientific program, there was also sufficient time for exchange between the students. The retreat was a great opportunity to gain insight into the research of others and the links of their work the work of one’s own, thereby broadening the own horizon.