The student retreat of the SFB 956 provides the possibility for 15-20 doctoral candidates from the SFB 956 to jointly visit locations of scientific interest. Furthermore, the students’ retreat is a valuable opportunity to become acquainted with other students within the institute and their work. This year, the Max-Planck-Institute for Astronomy (MPIA) in Heidelberg was chosen as the main part of the retreat, which took place from October 1st till 4th. Besides the MPIA, we also visited the University of Heidelberg itself and, on the next day, the “Auto & Technik Museum” in Sinsheim nearby. For accommodation, we stayed in little huts on a camping site in St. Leon, which were small but due to the perfect weather conditions, they were just right for us. Since one of the huts were a bigger one, we always spent the evenings together in that house, where we had a lot of interesting discussions and funny games.

We departed on October 1st at 1:00 pm with 10 students from the institute and drove to the camping site. We rented two cars, which was very convenient, since we took almost all the food with us from Cologne. We spent the first evening on the camping site and for dinner we cooked together in the big house and started our stay there with a very nice round of discussions. 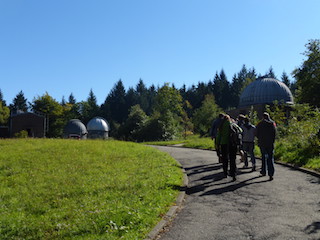 On Friday, October 2nd, we departed kind of early (8:45) to the MPIA, where we had a guided tour to the different telescopes, located at the institute. Additionally, we visited the public outreach center, called “Haus der Astronomie”, which is located in a building, which looks like a spiral galaxy. In that building, they installed a dome, which is fully covered with projectors, so that a nearly 360° view on a computer generated universe is made possible. Not only the large projector area was very impressive but also the interactive view on the universe, they showed to us. It was possible to zoom in, zoom out, and virtually fly through all the known parts of the university. They told us that this view was putting together all original pictures, made by, e.g., telescopes, of the different parts and that a computer system renders the interactive flight.

Near the MPIA building, there is also the “Landessternwarte”, where we had the possibility to visit an older telescopes, which is operated fully manually. In comparison to the modern one at the MPIA, this was a very interesting view on the technological improvements of the last century.

After having a lunch break at the MPIA, we headed to Heidelberg University, where we met Priv. Doz. Maarten DeKieviet, head of the historical collection of instruments in the physics department. Since the physics institute just moved into a new building, he started the tour with an introduction to the building itself, including all kinds of different anecdotes about the process of the construction but also about heat exchange devices, air condition, Internet infrastructure and more details about the building. After that, he gave us a tour through the collection of historical instruments, which appeared to be very fascinating, and in addition to the interesting instruments, he was a very good and enthusiastic guide. The instruments showed there are mostly from the middle of the 19th century, where G. Kirchhoff and H. von Helmholtz were professors at the university of Heidelberg and made many very important contributions to the development of modern physics. Indeed, for us, as students of the 21st century, this was a very appealing insight into the experimental work of that generation.

To close the day, we went to the historical city center of Heidelberg and walked up to the castle, which, due to the fine weather, was a very nice walk and provided a fascinating view across the city. After that, we had a dinner at an Italian restaurant, which was very nice and we used it to discuss, among other things, the different visits of the day. 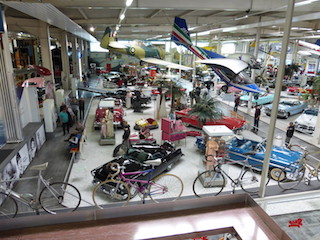 On Saturday, we started around 10:00 to visit the “Auto & Technikmuseum” in Sinsheim. Surprisingly to us, in front of the museum, there was a big classic motorbike meeting, where we saw hundreds of motorbikes. The museum itself provides a huge variety of different, old and new, cars, planes and locomotives, where, to name one highlight, we could visit the Concorde plane, which is located on one of the roofs of the museum building. Not only public cars were showed, but also military vehicles from the two world wars. Interesting to learn from that particular part of the large exhibition was that by law every military vehicle has to be partly destroyed before showing it to public, since it must not be possible anymore to move with or even hide in it.

After the usual lunch break in front of the museum, we also watched a 3d-movie about the Hubble telescope, which was shown in the IMAX cinema, located in the museum. This was very impressive again, since on the last mission of NASA to repair and exchange parts of the telescope, they had a fully equipped 3d-camera on board, which made impressive pictures of the work on the telescope and indeed of the view on the earth from space. In the evening, we went back to the camping site, where had a barbecue for dinner and again used the big house for staying the evening and discuss the visit of the day.

On October 4th, we departed to Cologne at 11:00 and brought the cars back to the rental company at around 2:00 pm.

Altogether, all participants of the retreat gave a very positive feedback on the scientific and social program we had, and we all fully agreed that it was a great opportunity to get to know each other. For next time, we agreed on finding a more convenient place to stay, since the huts were very little and only one of them provided an own bathroom and a kitchen. However, we were lucky to have such nice weather conditions, so that it was not a real problem this time, but for next time, we agreed to look harder for alternatives. However, we also agreed on even more advertising the retreat in the future to all the other SFB students, so that we maybe get more participants next time.