The SFB 956 students’ retreat provides the possibility for 15-20 PhD candidates from the SFB 956 to jointly visit locations of scientific interest. Furthermore, the students’ retreat is a valuable opportunity to become acquainted with other students within the institute and their work. This year, the drop tower in Bremen was selected as the main point of interest for the trip from September 25th till 28th. Because accommodation was easier to find close to the seaside, we stayed in the holiday park Dorum-Neufeld with five students each in three houses. The social component is much more distinct this way. We prepared all meals together as the houses were equipped with kitchens. Also the close proximity allowed us to spend a day in Bremerhaven as well.

We departed from the institute on Thursday, September 26th at 9:30 with 15 students, 14 of which were male and one female. We traveled in two busses rented from StarCar with 9 seats each and arrived in Dorum-Neufeld at about 14:00. The first day was then spent in Dorum, visiting the Seaside, shopping for food and with a dinner we cooked together in one of the houses.

On Friday, September 26th at 10:00 we departed in two groups to Bremerhaven, where we parked close to the Museumshafen and had the opportunity to visit the museums there. One group visited the Klimahaus 8° Ost, which offers a tour through many climate zones existing on earth. The other group visited the Deutsches Auswandererhaus, a museum describing the motives and conditions of migrants leaving Germany from Bremerhaven between 1850 and 1950. At 13:00 we had a guided tour through the Alfred-Wegener Institute of Polar and Marine Research, which is one of the Helmholtz Institutes in Germany and thus solely funded by the government. It is also the institute operating the Polar-stern, the famous and only German research ice-breaker. This institute works on the impact of the ocean and the Arctic/Antarctic on our climate, the weather and generally on our lives and employs a variety of scientists, including physicists and geophysicist. We first had a general tour introducing us to the institute, its outposts in the Antarctic and research areas.

This tour was completed by visits to the laboratories, like the ice lab where drilled ice cores can be examined and which is permanently conditioned to –20 °C. After the general tour we had a specialist talk by Dr. Hartmut Hellmer, who is a physicist working on measurements and simulation of the ice melting in the Antarctic. In his Talk “Impact of the Antarctic ice melting on sea level rise” he presented recent results showing the impact of the melting of Antarctic shelf ice on the sea level on timescales of about 150 years. His predictions show that the sea level will rise about 5 mm per year in 2100, compared to 1 mm/year today. It also became apparent, that the basic problems of modeling and linking models together are pretty universal, as they also arise in our models of star-forming regions.

In the evening we visited the Deutsches Schifffahrtsmuseum and the German submarine “Wilhelm Bauer” showing a nice variety of technological development in ship and marine technology. To complete the day in the evening we had a barbecue together in one of our houses in Dorum. 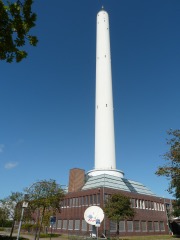 On Saturday, September 27th we departed to Bremen at 10:30 and started with our guided tour at the the Center of Applied Space Technology and Microgravity (ZARM) which also operates the drop tower. ZARM is an institute from the university of Bremen, but it is also open for industrial research and material testing. The drop tower is mainly run under an ESA grant, to which also PhD students can apply for experiment time. Usually the tower is able to perform two drops per day, offering a zero-g time of about 5 seconds for a standard drop with loads up to 800 kg, and 10 seconds if operated with the catapult, but with reduced loads of only 450 kg. The unique quality of the free-fall tower is its very good zero gravity, currently below 10–6 g, which beats parabola flights and even the conditions on the International Space Station. Nearly all standard laboratory equipment can be deployed on an experiment in the drop tower and no certification is necessary.

Our tour guide was Holger Oelze, who worked at ZARM since his PhD and is now managing the operation of the different ZARM facilities. His former main research area was fluid dynamics. He led us through the mounting hall of the experiments and down to the acceleration mechanism for the catapult. We also had a look inside the drop tower’s vacuum chamber and into the control room. After visiting the tower we also had a look at the neighboring centrifuge operated by ZARM, which can create high-g test conditions up to 30g and is used e.g. for the commissioning of airplane parts. It was very impressive for us to visit these large research devices directly. The rest of the afternoon was spent in the old town of Bremen, where we had free time to visit interesting places like the Liebfrauenkirche, St. Petri, the old parliament with the popular Bremer Stadtmusikanten and the Schnoor part of the city. In the evening we had dinner together in Bremen at the restaurant Friesenhof, which offered a variety of typical northern food.

One issue in the preparation of the students’ retreat was the relatively short time due to the evaluation of our SFB. Therefore, we had a bad estimate of the number of participants and booked more beds than were actually necessary. It should also be mentioned that while some groups were nearly fully participating, other groups in the SFB showed no real interest in joining the retreat and some students cancelled their participation on short notice. One suggestion for next year’s planning is therefore to determine the demand early and prevent funds being wasted. Despite that, we are again well below the budget limit this year.

Overall, the feedback of this year’s students’ retreat was very positive in the sense that we had an exciting and diverse scientific program and interesting social events to learn about Bremen and Bremerhaven. The evening activities with board games and just a good time together were valuable in learning about each other and sometimes even discussing deep philosophical topics from our different cultural backgrounds, leading to a better mutual understanding and an even healthier working atmosphere back in the institute.